I present to you the newest member of my family: a Singer 401a. The machine I originally wanted was the Singer 501a, adventurously labelled “the rocketeer”. The rocketeer was everything I wanted in a machine: innovative (the slant shank was introduced to bring more visibility to the sewer), stylish (I’m a HUGE fan of the space-age styling, and a rocketeer would look fabulous right under the boyfriend’s soviet era space exploration poster), and durable (the rocketeer features only one non-metal gear, and it’s bakelite, which is essentially nuclear-proof). Unfortunately the rocketeer had just one flaw: it was impossible to find. I did see a few models pop up here and there on the local kijiji, never for less than 300$!

So why am I telling you all about the rocketeer if I couldn’t find one? Probably because it’s just such a beautiful machine! So I set my sights on the rocketeer’s cousin, the 401a, which doesn’t have such a cool nickname. To my knowledge it actually doesn’t have a nickname at all! (Suggestions?) The 401a proved as difficult to find as its more stylish cousin. I finally spotted one about an hour away from home for 60$, and the boyfriend agreed to take me on a road-trip.

I was so excited I performed the two cardinal sins of buying used:

Number 2 is the worst thing you could possibly do. The girl who was selling it said it still worked, but I had never seen it run, I was so excited to just get the machine in the car and home so I could try all the things! This was very dangerous, replacements for certain singer machine parts can only come off other old singers. With the difficulty I had finding this one, I now realize I might have had to find another one if the motor wasn’t running!

I did find some other things though. The machine was so dirty it turns out the colour you saw wasn’t the colour of the machine. It was the colour of decades of piled up crud! There was so much lint and cat fur in the machine you could’ve made a whole cat, and knit it a sweater with what we pulled out of there! But for all of its shortcomings, the motor purred, and the machine runs very, very smoothly. Which was surprising considering we found a drapery weight inside the body of the machine! Of course it was brought in for a tune-up, and since then I have actually sewed with it. 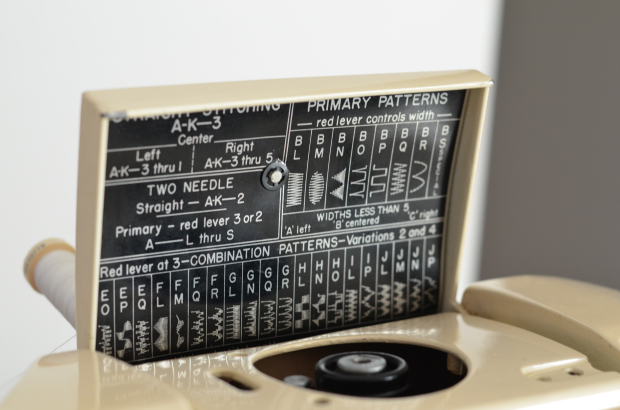 I hope you’ve enjoyed looking at my new machine, I can’t wait to show you what I’ve been up to with it! And I also have a second surprise purchase to blog about!